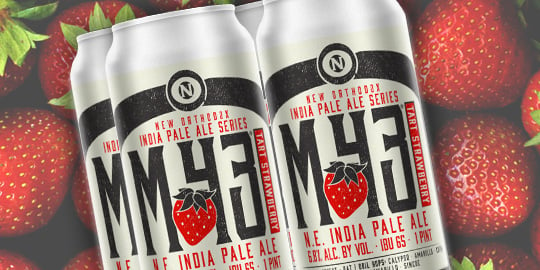 We’ve gotten into some pretty expensive ingredients in the last couple of years here at Old Nation: Designer hops, Local Oat malt, and Uber-fresh yeast sent in and propagated weekly. On top of that, constant trips to our distributor to check freshness and quality and as much time amongst our 3,000 or so bars, restaurants, Grocery stores and party stores all across Michigan as we can manage.  The way we’re brewing and selling beer right now is expensive and time consuming.  It doesn’t have to be, but it has to be, if that makes sense.   So, every now and again it’s nice to have some fun and stretch out with a flavored version of our top selling beer, so that we can talk about that process, if nothing else.

Over the Summer of 2017 and into March of this year, we were struggling to put out any beer at all which wasn’t M43.  With tanks at 80 and 120bbl, mostly, we couldn’t afford to “Plug up the system” with beer that probably wouldn’t sell at that volume (again, essentially take the barrel volume of the tanks and multiply by ten to get a rough estimate of the amount of cases of beer in that batch.  So, 80bbl X 10 = 800 cases of beer or so).  Getting beer out to the retailer wouldn’t be so hard, but getting focus on a shoulder brand in an already very crowded craft beer market would have strained our already limited resources to the breaking point, so we stuck with M43 and the other New Orthodox brands on the production system.   This particularly caused an issue when we had beer festivals, mug club parties, tap takeovers, etc, which required 6 or more discrete styles.

So, in the short term and to bridge the gap until our pilot system was installed, we did a few kegs of this “variant” of M43 or the other, never planning to make any in full production.  But, folks have been asking for one of these variants in a can for almost a year, now, and we felt like spring of this year would be a good time to try one, as our new tanks are in and we haven’t moved fully into any other state in a way that strains our capacity in this slower time of year for beer sales.

But, because I’ve been a complainer about flavored beer for a long time, I feel like I have to share what I know and how we made the Tart Strawberry M43, and why we did it that way.  So, here goes:

The best way to flavor beer with natural ingredients is, generally, to age the completely fermented beer on a great deal of fresh fruits, herbs, spices, or whatever.  This can be and often is done in a wooden barrel, and gives some validity to the high prices often charged for barrel aged stouts when aged on vanilla, cocoa, cinnamon, chilies, and whatnot.  In the case of those herbs, spices and vegetables (and others like them) no fermentable sugar is added to the fermented beer so, as long as the brewer and her staff keep the process tight and sterile, everything is fine and the beer can be packaged and sold at room temp (if necessary) and can be stored for some time.  That is to say, herbs, spices and most vegetable additions to fermented beer add flavor, but no sugar to potentially re-ferment in the bottle or can, causing possible issues of over-carbonation or exploding containers downstream.

In the case of “Fruit Aged Beer”, a usually huge amount of one desired fruit or another is macerated (or brought in as a puree) and left to transfer flavor with end-fermented beer over time.  Generally some fermentation occurs during this step, and quite often those beers are pasteurized, if they are being distributed in large batches and over some distance, in order to prevent bacterial re-fermentation (including any yeast left in the beer).  This can result in really powerful fruit flavors in the finished product, but the amount of fruit introduced to these beers for that “Fresh” flavor is immense, and so cost is commensurately very high. 2018 has seen a trend to make “joose”, or “-cicle” type beers, which take this method to the extreme.  This results in a kind of beer smoothie in which a puree of a given fruit is blended with the beer, sometimes in a 50=50% ratio.  This is inarguably delicious, but is also expensive and results in a lower alcohol beer (which is no problem) which costs a relatively large amount (also not problem, as long as you know what you’re paying for).  The ingredients used in the examples of this new kind of fruit beer I’ve had have been top notch, without question and are generally a base fruit like orange or raspberry, with the addition of a lot of natural vanilla.  Hence the –‘Cicle name, ie. Creamcicle, etc.  It’s pretty well known by now that many of these beers are not stable, as they are packaged as very fresh, end fermented beer which contains active yeast, along with a great deal of fermentable sugar introduced by the fruit puree.  If these cans are left out, fermentation will occur, pressure in the can will build, and explosions will happen.  Again, most of the breweries making these mixed beverages are really good about letting folks know that they absolutely have to drink the beer as soon as is humanly possible, and left very cold until consumption.

There are other ways that brewers use fruit, of course.  At Old Nation, Nate Rykse’s favorite way to use fruit is to introduce as much fruit as is reasonable into the fermenter right at the end of fermentation.  In a beer that can’t be aged, that covers enough fermentation to make the beer more or less safe (in kegs in a pub setting, at least) and keeps at least some of the aroma and flavor of the fruit intact to at least be present, if not overbearing, in the finished beer.  Raspberries work well for this, for example, as can cherries, because these fruits have a very strong and distinct flavor which tends to rely less on sweetness to complete the full flavor of the fruit on the palate.

The problem with fermenting fruit at all is that fruit doesn’t just rely on a distinctive flavor to identify itself on your palate.  Your brain also wants the general Ph of the fruit, something like the sweetness of it and the delicate aromas that it brings in order to clearly identify, say, a strawberry as a Strawberry.  But, aromas are detectable by your nose for a very special reason:  Things that you can smell are, by their very nature, volatile.  Biological chemical groups that present as aromas “cook off” at lower temperatures than other, more stable, groups. That’s true at room temperature and even more so as air is forced through a liquid – as Co2 in fermentation, or as water vapor in the case of boiling.  This is why your grandmother’s Red Sauce doesn’t taste right unless it’s cooked all day. Essentially, all of the competing aromas in all of the strong ingredients are cooked off, leaving the salt, acidity, sweetness, umami and texture of the base and additional ingredients.  That’s what people mean when they say that the flavors in a thing “blend” the longer it cooks.  So, allowing fruit to ferment stabilizes the finished beer, but some of the sugar in the fruit is fermented, the amount of fruit used isn’t enough to necessarily change the Ph of the beer, and a fair amount of the aroma of the fruit “cooks off” as C02 is produced in fermentation and carries away the scent of the original fruit.   But I digress…

This can be a particularly problematic with flavors like “maple syrup”.  Sometimes other natural items are used to mimic the aroma of the target item (fenugreek can sort of work as a substitute for maple flavor, for example). Delicately flavored fruits like strawberry, kiwi and others can also be very problematic for the reasons discussed above. In my experience flavoring beer, liquor and other beverages, fermented strawberry or kiwi, or those fruits used in small quantities, just taste like potassium.   This can go for fruit like mango and other, more subtle tropical fruit flavors, as well (how many times have you heard someone say that they can’t tell if a flavor is Mango or Papaya?  They are different, but subtle).

For that reason there’s a third, brutish solution which we chose for the tart Strawberry M43.  That’s using aroma extracts to get the aroma and flavor one is looking for.  We chose the best flavoring we could and, for the whole batch, didn’t spend enough to raise the price of a 4 pack, which is why you’re getting it for $14.99, the same price we sell M43 at in the pub.  It’s the same extract we’ve used for every small batch iteration of the Tart Strawberry M43 and, because extracts are extremely consistent, it should taste exactly like you remember.  This is not the first time you’ve had a flavored beer which has used an extract (natural flavor).  I’m not sure how many breweries have copped to this, but it seems to me like more should.  I’m certainly not saying there’s anything wrong with using these flavorings and, short of making a kind of fruit/beer smoothie, it’s the only option for us to get the level of aroma and flavor we need out of a beer which can’t be aged.  Additionally and while important to the final product not terribly relevant to the point of the story, we should also tell you that we lowered the pH a touch to help mimic the pH of the fruit, for easier recognition and to stabilize the beer biologically and non biologically.

I know it’s not way before we sell this beer that I’m releasing this blog, but I hope it’s soon enough that folks who don’t want anything but actual mango, or passionfruit, or tart strawberries in their flavored beers will be able to make their best decision.  I’m really trying to suggest that you look at the beer that you drink carefully in this context in order to reason through that best decision every time.  What I’ve shared here is not that much of a secret among brewers.  It’s also not to suggest that no brewers exist that use only whole fruit or whole fruit puree instead of aroma extract, or in concert with it; just that there are a number of ways to introduce aroma and flavor to beer, and to give you an idea of how to judge what might be in your beer, in the context of product which is only sold in MI and doesn’t have to adhere to the same label requirements as beer sold out of state, which must be vetted by the federal Tax and Trade Bureau’s formulations department, which can change the way ingredients are reported on the beer’s label.

That was a lot to write.  Thanks again for sticking with me to the end.

IF YOU’RE STILL INTERESTED IN SOME TART STRAWBERRY M43 AFTER ALL THIS, HIT THIS LINK FOR SOME TICKETS AT NOON TODAY!