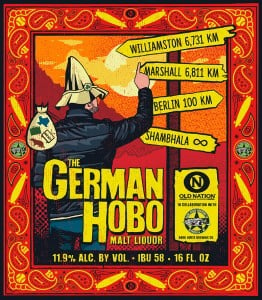 Our collaboration beer with Dark Horse Brewing Co., The German Hobo, is now available on draft at your favorite restaurant or watering hole. Also, look for it in 16 oz. cans, beginning next week. Now if you don’t see The German Hobo at your favorite bar or retailer, just tell them that you would like to see it in their establishment.

Now for a little background on this beer, including why we chose this style and the significance of the artwork, here’s a plethora of information that will help you understand this fantastic brew.

At the Grand Valley Brewing Company in Ionia, Michigan, some time around 1937, Clarence “Click” Koerber first brewed Clix Malt Liquor. In 1942, at Gluek Brewing in Minneapolis, Minnesota, Alvin Gluek had a similar idea. The grandson of the brewery’s founder, Alvin was happiest in the laboratory, tinkering. And one day, he found a way to brew a beer that would use less malt but have more of a kick. He named his malt liquor Sparkling Stite by Gluek, courting drinkers with champagne aspirations. Envisioned as an upscale product, Sparkling Stite was even promoted with score pads for bridge players. So we decided to pay homage to this story and style.

The art on the outside border is simple representations of what we brought to our brewing careers before we started them. Each one represents one of the brewers who worked on this beer, except Travis.

Matt is a SAG card carrying actor, and Travis saw him in a fantastic play before he worked at Old Nation. Matt is a true, hard working artist in the fullest sense. He understands the difference between a cool idea and a workable one, and has the skill set as a brewer to take a workable idea all the way to production.  Matt is the shit.

When Bryan and Travis first met, 13 years ago, Bryan was a semi-pro pitcher. Raw boned, tall and lean, Bryan looked like a scouts wet dream. He was working part time on a bottling line at a brewery Travis worked at in Battle Creek. Bryan and Travis stayed in contact over the intervening decade plus. In that time, Bryan developed into what he is today: a born again badass. Bryan is the shit.

Nate is many things. A university trained brewmaster (U.C. Davis), an encyclopedia of songs you don’t want stuck in your head, a degreed Microbiologist/Biochemist and a level headed, unflappable dude.  Nate and Travis have been brewing together for other folks for 8 years. Old Nation Brands are their baby.  You’ll find Nate riding a longboard in our huge warehouse facility as he was a Phish following hippie skater all the way through college. He’s fine now, though. Nate is the shit.

Aaron is a mechanic. He’s happiest when he’s working on a machine. He’s a world class brewer, but his skill set has always been based around how his equipment works and how to make it work better. Or how to just get it through the next run. Aaron is kind and generous, even if he looks like he’d just as soon run you over as chat. Aaron is the absolute shit.

What the Hobo carries with him on his knapsack and hat represent difficulties we’ve experienced over our time in the brewing industry which helped us to grow as brewers and business people.
Nose: Orange rind and spice from subtle dry hop additions of Hallertau, Mittelfrueh and Bavaria Mandarina hops, strawberry, and alcohol.
Body: Medium per ABV.
Mouthfeel: Full and rich, limited heat from ABV.
Taste: Caramel, notes of stone fruit, clean, some alcohol.
Finish: Clean and very crisp for such a high ABV.

Lastly, The German Hobo is Travis.  He finally found a home doing what he loves with folks he loves in Williamston, MI.  And it’s incredible to share with friends like the folks at Dark Horse.